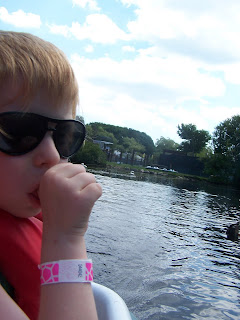 Standing in line to check-out a woman looked down at my son and said, “What are you doing with that thumb in your mouth? Big boys don’t suck their thumbs!”. I quickly turned around and replied, “This big boy does!”

I am so tired of the thumb-sucking subject and I certainly don’t want unsolicited advice about it from people who do not know my son.

He’s been thumb-sucking since he was in the womb though it did get markedly more obsessive about the same time he drifted into this world of autism. The debate about his habit began when he was four.

Everyone was thinking about the upcoming year when he would go into kindergarten and the fact that thumb-sucking could be made fun upon by his peers. Seriously? You are worried about the thumb? Have you noticed his high pitched noises he likes to make for fun, his flapping, his abundance of energy that makes it so he can’t sit in a seat for too long, or maybe the little fact that at that point he really wasn’t talking at all? I think he’s already going to stick out like a sore thumb (pun intended).

Well, we went for it anyways. I could agree with the argument that it was starting to get in the way of his speech. He was trying to talk around it like kids do with their binkies.

So we started with that gross-tasting ointment you put on your thumb to try to deter them from sucking it. Brian didn’t mind it. He knew if he just stuck through the initial licking of it the taste would go away.

Following that we tried thumb guards- which reminded me of some medieval torture device. My kid was too smart for those. Instead of chewing the material around the thumb like I thought he would, he chewed the strap that would hold it in place and once it was broken there was no way of fixing them.

At that point everyone gave up. I was glad. Trying to make him not suck his thumb was only making him more stressed and wanting his thumb more. In my opinion I was glad that my anxious autistic child had a way to soothe himself that was always available. I know a lot of children like him that don’t have that, they can’t bring themselves back down that easily.

So, here we are at six years old and still sucking his thumb. At least at this point if I tell him to put his thumb down when he’s trying to talk or I need him to use both hands he’ll do it without a fuss. Other people still find it really annoying but for me, it’s just a part of who he is. And those other people can go suck it (another pun intended).