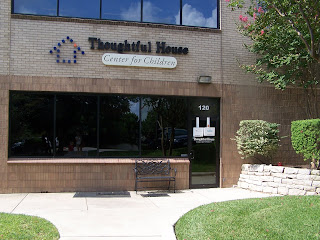 I have so much to write about that it’s hard to sit down and write. Does that make sense? I’m going to break it up a bit so I don’t have one really long post that starts to bore anyone after the 22nd paragraph.

The morning started off great, though I should have realized something was up when Brian only had three bites of his pancakes. Shortly after arriving at the Thoughtful House to start our appointments I noticed he was shaking. I thought it was a little funny but our world is filled with strange occurrences so I blew it off a little.

Our first appointment was with Lucas Ramirez, the FNP on staff, and it was then as I was holding him in my arms that I realized he was hot. No, not the doctor (though he’s not bad) but Brian- he was definitely running a fever.

Again, not a huge panic moment. Unfortunately Brian frequently has these little viral infections. It was this first appointment that made me realize how different this was going to be for me. Most of the staff at The Thoughtful House have been touched by autism. For Lucas, it was his son, and it was because he was searching for treatment that he fell into this line of medicine he is currently in. When it’s that personal, you just know that they are really there for the greater good. They’ve personally done the treatments with their children that they are prescribing for your children. They have the same struggles and can give you “real-life” suggestions for things like taking supplements and collecting urine samples.

So out of our appointment two interesting areas popped up that will be interesting to pursue. One is yeast- which I think I’ve known for a long time but maybe have been in denial. Yeast could really account for Brian’s bowel movements, his “manic” episodes, and his night wakings. We won’t be addressing this yet, still have a stool sample to take, and we need to address general GI clean-up first. Second is PANDAS, which I’ve heard of in the past but never really thought it sounded like Brian. The difference now is that he is having all of these “OCD” components and they did come on quite rapidly last winter. Before then routines & rituals was actually one of the areas of autism we didn’t struggle with. So a Strep test is going to be done just to rule this out.

After this session we had our lunch break and that is when I knew Brian was really sick. He wouldn’t eat, he didn’t want to move, and we ended up just spending our break in the waiting room- he slept.

We had an appointment with the Educational department after and this lady knew her stuff- haven’t got the report back yet so I can’t remember her name! Mommy brain. Anyway, she has her masters in special education as well as her law degree. She validated my feelings that our school isn’t doing everything they should and she was actually pushing for me to sue them for the entire last year because they never did their own assessment on Brian. Who would’ve thought it? I just took charge and did our own assessments- I didn’t really know they were suppose to. I really need to learn more about special ed law. In Early Intervention I felt like I knew it all and ever since last year when we graduated from EI, I have felt lost. I’m really looking forward to her report and passing it along to the school.

After that session it was apparent to everyone that we needed to hurry up and end the day. Brian was miserable. One of the nurses came and took his temperature and it was 101.5. We called the cab, who brought us to CVS so I could get a fever reducer. While in CVS Brian threw up all of the water that he had just drank (the first substance he had tried after the three bites of pancake in the morning). Not in the CVS bathroom, but right in the children’s medicine aisle. Our cab driver by the way, comped us, and wouldn’t allow me to pay. He’s the cab driver that the Thoughtful House always uses and when he found out I was a single mother he told me he wasn’t going to charge me for another ride.

Got back to the hotel room and realized that in my hurry to get out of the CVS I didn’t think to grab anything else but the medicine. I didn’t have a thermometer or Pedialyte. I called the front desk and they brought us some disposable thermometers from their first aid kit. They were so awesome. Not as awesome as our case coordinator though. She called, gave me her personal cell phone number, and told me she was going to bring us some Pedialyte. She went out of her way and brought it over and called and checked on us several times to see how Brian was doing. 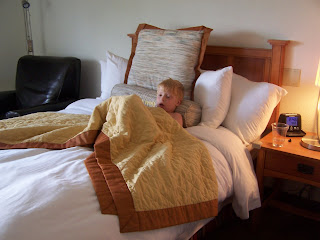 So even being hundreds of miles away from my awesome community I found that we still had support from a lot of different sources. We were still involved in a wonderful community (though many of us would rather really not be a part of it)- the autism community.