We’ve had a great few weeks. Just wonderful. Brian has been happy, laughing, engaging, and imitating every time I look around. I know I tend to blog more about the hard days- because those are the days I need extra support- but I need to post more about these good things. Because these are the things that keep me going!

Brian’s teacher can not stop gushing over how well he is doing this year. He’s been great at following directions and when he doesn’t understand he’ll look for his peers to give him an idea of what he’s suppose to do. Last year I’m not even sure he knew there were 15 other kids in his classroom!

Some of the big differences I’ve been noticing is his ability to focus a bit longer on activities, not always of his choosing. Two nights ago we were doing puzzles- I gave him an alphabet puzzle and he finished it. Generally he would run away after. This time he grabbed a number puzzle and did that too. A few weeks ago in speech he played through an ENTIRE game of Go Fish. Granted the next week he only played three rounds of it. But the ability is in there- and he’s letting us see it!

This first picture came home last week during Fire Prevention Week. The pictures were mixed up and he had to cut them out and then arrange them in the right order. What gets me all excited with this work is that he WROTE “stop”, “drop” and “roll” on the pictures. The words are on the wrong pictures but it’s easy to figure that out- they were originally in a different order before he cut and he wanted the words to be in the correct order. Thing is WRITING THE WORDS wasn’t part of the activity. And my son HATES to write. Yet he took it upon himself to WRITE the words. Yes, I said WRITE. Ha, can you see my enthusiasm for this WRITING?? 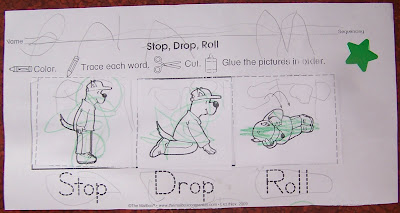 In occupational therapy a couple of weeks ago he was asked to turn his worksheet over and write his name. He wrote his name, no problem, and then proceeded to draw what I can only imagine is his self-portrait. This was the FIRST time ever he has independently drawn a person. He’s drawn them mimicking others, but never spontaneously and independently. My jaw just dropped to the floor! 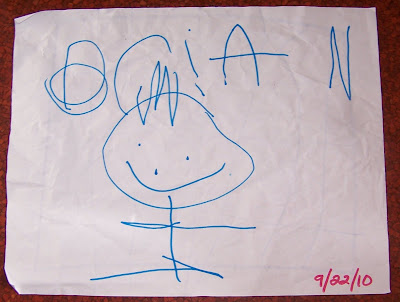 My last boasting moment comes with an art project I had laid out for the boys. I had a lot on my plate this weekend and I kept trying to set out activities to keep the boys busy for a bit. Most of the time only Corbin would do it and Brian would just walk around in circles repeating “Tommy and James and Percy and Gordon and Harry” over and over and over again (hey he’s using conjunctions!). I laid out a sponge cut up into tiny pieces and a picture of a bare tree for each boy. Brian joined right in. The both completely covered their trees and Corbin started to make another. Usually if Brian finishes a project he’s off and running. Instead he looked at Corbin and then went and found a second piece of paper for himself. Corbin asked him if he wanted him to draw him a tree and he answered “Yes I do”. Then they both sat and made another tree. 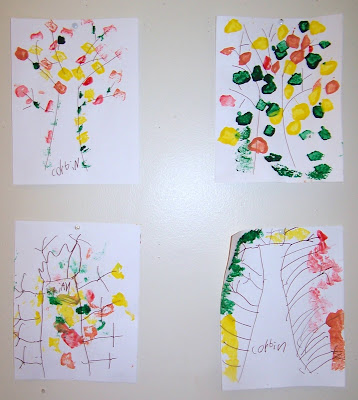 I’m not sure I’ll ever, again in my life, take such little milestones for granted.