Do you remember where you were when you heard about the attacks on 9/11?  I do.  Yet I don’t remember what I ate for breakfast today.  It’s crazy what your memory will store when there is a traumatic incident.

Do you remember the day your child was diagnosed with autism?  Same thing.

June 6, 2007.  It was actually his second diagnosis.  Almost a year prior to this he was diagnosed with PDD-NOS, but his Dad was in denial and hounded me to get another opinion.  I knew that PDD-NOS was being easy on us, I knew if we went for another opinion we were going to hear the A-Word.  Yet, I told him I would schedule it if he came along, thinking it would help with his acceptance.

The night before the appointment he called and said he couldn’t make it.  So I drove the hour and a half to the hospital with feelings of anger, dread, and sadness.

I remember all the little things that made up that day.  I remember Brian was in a phase that he closed his eyes every time the camera came out, protecting himself from the flash.  I remember he was still so extra-sensitive that he would NOT wear shoes.  I had to purchase him See Kai Run shoes, which were the only ones he would tolerate for at least long enough to get out of the car and into the hospital.  He then kicked them off and spent the rest of the day barefoot.

I remember thinking the developmental clinic was insane to have a fabulous train table in the waiting room.  The waiting room they expected Brian to transition out of four different times.  I remember we had already started the diet, so when we had our lunch break in the middle of the full day of tests and evaluations, we drove to a local pond and ate the picnic I had packed.  I remember there was a grandmother at the pond with her grandchild, about the same age of Brian, and seeing how they were playing together.  I was busy trying to keep Brian from trying to eat the splinters of wood he was picking off of the picnic table.  I was trying to pretend we were “normal” and I kept talking to him, but it was making me even more lonely, as he didn’t look at me or respond.

I remember at the end of the day hearing that he had Autism.  Not PDD-NOS, but full-out textbook Autism.

I remember leaving. Getting Brian into his carseat, pulling myself into the front seat, turning the car on, and then covering my face as I started to cry.  I cried until Brian started whining in the back seat and then pulled myself together to start the ride home.  I was trying to figure out why I was reacting so strongly.  I knew, going there, we would be told “Autism”.  For some reason it seemed like if we could’ve held on to that PDD-NOS diagnosis we would have had more hope, even if the diagnosis wasn’t accurate.  At that point in time I wanted to hold on to that false hope. 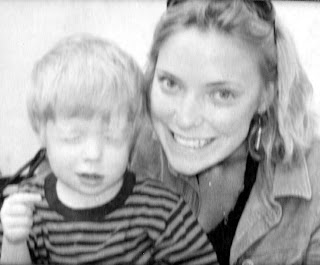 The developmental clinic took this picture of Brian  to keep in his file.  He wouldn’t sit still on his own, so I had to put him on my lap.  For some morbid reason I keep it framed in my bedroom.  I sometimes wonder why I keep it in a prominent place.  It wasn’t a happy day.  Yet it was a day that defined our lives and our futures.  So it was an important day.  It’s amazing how much your life can change in just one day.