By now everyone knows that Brian has had a hard couple of days. 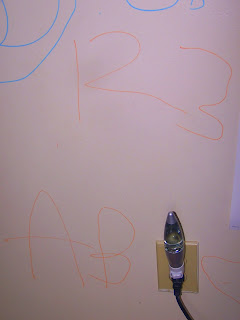 Public temper tantrums.
Throwing items when he’s mad.
Destroying Corbin’s lego city.
Erasing data on Corbin’s DSi.
Coloring on walls.
The last big screening Brian had done he came out about an 18 to 24 month old level developmentally.
My explanation for the new behavior is there has been growth.  I remember Corbin at three.  I remember always saying, “Why the hell is it called Terrible Twos?  Three’s are SOOOOO much worse!”  So that’s it…..developmentally Brian is now three.  So there…how’s that for a positive spin on a hard couple of days with new negative behaviors?
He never drew on walls like most preschoolers…now he is!  Yay!  And look at those ABCs and 123s!!
Hey, just go along with me here…I like this theory and it makes for a happier mom, hence a happier home.