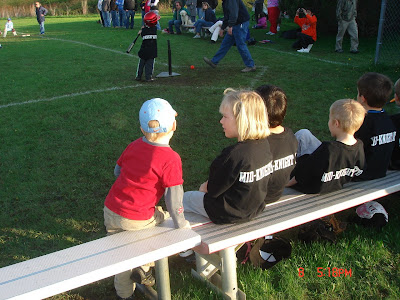 This is one of my favorite pictures from the tee-ball season. Brian decided to sit on the bench with the players and as they all slid down the bench, as each one batted, he would slide along with them. He was laughing, babbling, and smiling. It was so wonderful seeing him, WANTING to be with the other kids, following what they were doing, and just seeing him stay in one spot- as usual I’m chasing him all around the adjacent field.

One girl was particularly interested in him and kept asking him questions. She started to get frustrated as he wasn’t answering. She then asked Corbin, “Is this your brother?” Corbin answered, “Yeah- he my brother, Brian. He don’t talk- he don’t know anything.”

It stung to hear that come from Corbin. I know that it was just his simplistic way of trying to explain his brother and I know the girl didn’t take it like I did, as she continued to talk to him. It only hurt me because I really worry that most people think that of him. I have worked for years drilling this through Brian’s teachers and therapists heads- that his lack of language does not equal his cognitive abilities.

I know that Corbin doesn’t think that about his brother- or he wouldn’t ask him to build a fort with him, or show him how to dry the dishes, or take the time to practice colors and numbers with him. So I tried to look at it as he was just happy to share his brother and he wanted to spread the word on autism, as well, just in his own way.