So day two started off wonderfully. Brian woke up smiling and with absolutely no fever. He drank some of the Pedialyte that our coordinator had so graciously brought over the night before and then stuffed himself with four pieces of leftover pizza. All signs pointed to a much better day.

We arrived at the clinic just in time for a blood draw. Always a wonderful way to start the day. It didn’t make Brian happy but I will say it was the least traumatic of all the blood draws we’ve had done. It helped they had a television in the room with a whole binder full of kid-friendly (autism-friendly) movies. He cried and kicked but it didn’t take four people to administer, like it has in the past. He also remembered he was suppose to yell “Ouch!” but only after the procedure. 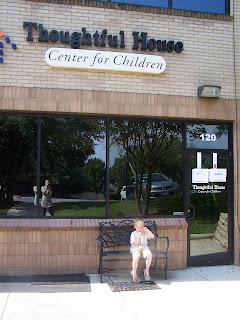 Following that we went on to our appointment with a dietician, Kirsten Bell. I think this may have been my favorite appointment as I knew there was work I could still do with the diet and she really helped me understand HOW to cook certain things and HOW to get him to eat things and just gave me a whole new bag of tricks to try.

It was very interesting, and scary at the same time, to see how she had analyzed the food diary. Brian is, on average, consuming about double the amount of protein he is suppose to have, less calories than he should, just about the right amount of fat (but not enough good fat), and pretty much zilch on many essential vitamins and minerals. I guess none of it really surprised me, but still, to see it on a graph and in black and white, it feels much more urgent to address.

We talked a lot about regularly cleaning Brian out…..which came at a good time because as of right now he’s on day five of no bowel movement. It was the first time I had talked to a professional about the fact that I don’t feel like he even knows how to get his bowel movements out, that didn’t look at me like I was losing my mind. See, when Brian has a BM he’ll be in the bathroom trying to go, but he’s always clenching, instead of pushing. I should apologize for too much information at this point, but if you are a regular reader I think we’re past those fake apologies. 🙂

Leaving the appointment we had decided to continue with GF/CF but to make sure we are also soy-free. We’re adding whole-food supplements to help with the lack of fruits and vegetables. And we’ll be using Natural Calm along with Magnesium Citrate to help with the cleaning out.

Plus I left with so much information- what are healthy oils? Which oils can be used for what kind of cooking? Which vegetables and fruits NEED to be bought organic and which ones can slide? Where else can we get carbohydrates (another lacking area for Brian)? And so on and so on.

Last appointment of the day, skipping over some other assessments, was with the dentist. I always get so nervous before the dentist. I know that brushing teeth can be a big fight sometimes and I honestly often feel guilty that I’m not able to get in there like I should as often as I should. But it was our second dentist appointment in a row that we were told everything looks perfect! Besides the bucking and gapping of his top front teeth thanks to his thumb-sucking. 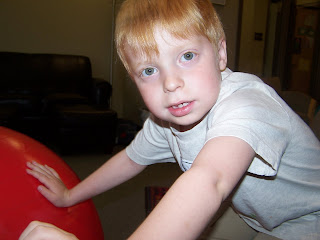 Leaving the Thoughtful House I felt excited, hopeful, and really happy that I had made the decision to go! We left with a nice, clear treatment plan that slowly adds in the supplements and diet changes. No one is expecting us to change everything overnight. I felt like this is what I needed- it’s really recharged my battery.