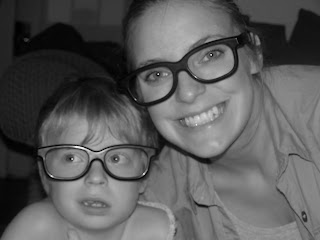 * Brian’s mood has been really, really great. Sure he’s always been a pretty happy guy but we’re not even having tantrums during “homework time” anymore. Even yesterday during that crazy, very loud birthday party he never checked out or had a tantrum.

* Bed wetting is *almost* nonexistent. From accidents four times a week just a month or so ago.

* Sleeping through the night!!!!!!!!!!!!! We’ve had two night wake-ups out of the whole past month! Prior to that we were having them nightly.

* Lots of independent, spontaneous talking. Sadly, I still can’t figure out 90% of it, because of articulation, but he’s trying. Really, really trying.

* Even more imitative language. Copying everything. Even the bad stuff.

* Medicine-taking has improved even since the last time I mentioned it. Though he had stopped screaming and spitting it out at me, I was still having to sit on top of him. Since Friday evening I haven’t had to do that once!

* He’s been less obsessive over certain toys and actually been pulling out a lot of toys that had dust growing on them and playing with those. But trains aren’t going any where, don’t worry.

* Out-of-school speech & OT has been going really well! Thinking back to early September when it was a struggle to get him to play “Go Fish”- now he’s sitting and doing several table-top activities all while smiling and laughing.

* And speaking of OT, when he walks in he is now grabbing the “pump swing” (pump your legs) rather than the “spin swing”. Sensory wise, something good is going on inside of his little body if he doesn’t feel the NEED to spin. And he’s starting to get quite good at pumping those little legs.

* From the reports at school, not only is he more willing to attend to academic work, he seems to be really trying to participate socially as well.