I never thought Brian wouldn’t have a bruise on his forehead from banging his head on the wall repeatedly throughout the day………….it’s now been three years since he has participated in self-injurious behaviors.

I never thought I would get Brian to eat new foods when I changed his diet…………now he’s licking asparagus and eating hamburgers without dissecting them first.

I never thought Brian would sing a song, I laughed when one of his speech goals was to fill in a word in a song…….now he knows around 20 songs.

I never thought Brian would take his supplements without screaming, kicking, and spitting……now he takes them independently.

I never thought Brian would sleep through the night, just one single night…….now he’s doing so 85% of the time.


I never thought Brian would be able to attend birthday parties without needing to leave early……..at the last one I had three other people remark to me about how well Brian did.


I never thought Brian would learn the alphabet…….not only does he know them, he knows the sound each letter makes.

I never thought I’d see Brian participate in the activities of a school event……..tonight I watched as he allowed himself to be blindfolded and spun so he could pin the arrow on the heart.

I never thought I’d hear Brian say “Mama”………………and I cried so hard when he first did. 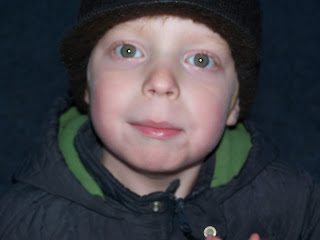 When I get down, when I think that I’ll never have a real conversation with Brian, or that he will never make a meaningful relationship with a peer, or he will never get a grip on all the academic stuff, I have to stop myself and think about all the other things I thought would never happen.