Brian has been getting into a lot of mischief in the bathroom lately.  It’s a relatively new thing.

The first time I received a text from Colin shortly after we had all left the home for school and work.  It read something like,

“I hope you weren’t a fan of your orange nail polish.”

Yes, my child had dumped orange nail polish all over the sinks in the bathroom.  I was oblivious to it because up until then he never did anything in the bathroom other than use the toilet.
The next time it was a bottle of foundation all over one of the bath mats.
This morning I was doing the morning routine and noticed the door was closed to the bathroom and there were giggles inside.
I ran in to find this. 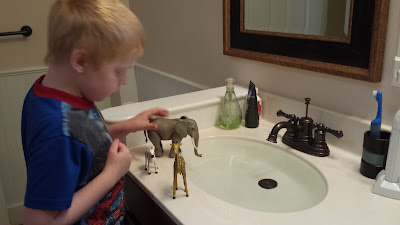 He looked at me with a smile and said, “Swimming animals!”
Actually he didn’t just say it, he yelled it at me with determination.  That is what he does when he has figured out a new phrase.  He yells it at us with this force as I imagine his connections in his brain are trying to make it ingrained so he doesn’t lose it again.
And I stayed in the bathroom with him, supervising that the sink didn’t overflow, but encouraging the pretend play and the new language.
I can’t say no to messy play when I see that it’s spurring new learning.  Splash away jungle animals!